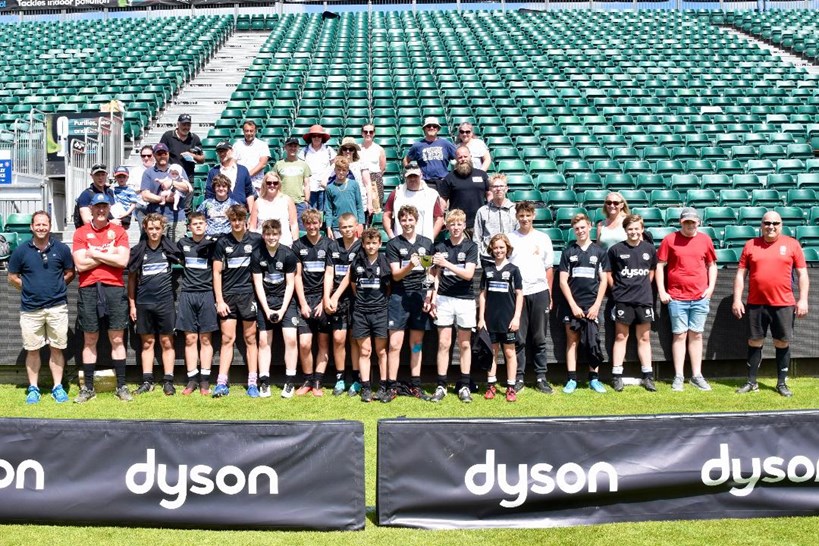 Devizes RFC Under 14 boys capped off their season on a triumphant note by winning the 2021 Bath Rugby Sevens in association with Dyson. They remained unbeaten throughout the finals and qualifying events involving Dorset & Wilts and Somerset teams, defeating Bath, Chippenham, Melksham, Royal Wootton Bassett, Trowbridge, and Warminster, and finishing with a comprehensive 49-10 victory in the grand final itself.
The Finals Day was held at the Bath Rec on Saturday 5th June and was an amazing experience for all the players, parents and coaches on a glorious day. To cap it off, the Spirit of Rugby Award was made to Devizes’s Riley Heyes. It was a fitting reward for this group’s love of rugby and its values, and many years playing together at Devizes RFC with Riley, Rory Lyttle (captain fo the day) and Sam Lever going back as far as Devizes Rugby Tots at the age of three.

Devizes Girls, who joined forces with Warminster Girls for the tournament, also qualified for finals day. Despite only playing together for a couple of weeks the girls put in strong performances taking 3rd place in the third/fourth playoffs with a 43-5 win over Supermarine RFC. A fantastic way to finish the Covid-affected season.